Dalmore Distillery, located between Invergordon and Alness, was founded in 1839.  In 2019 a group met weekly at Invergordon Museum to research activity at the distillery in World War I and World War II.

During WWI Dalmore Distillery was taken over by the U.S. Navy to assemble and deploy mines for the Northern Barrage, stretching between Orkney and Norway. Dalmore was known as US Base 17 and the second site of Glen Albyn distillery in Inverness became US Base 18.

The requisition of Dalmore distillery required the removal of gallons of whisky, and then the building of hangars, sheds, a new pier, accommodation, extensive railway sidings and a new branch line to Invergordon.

Base 17 was a major undertaking, with over 1000 men stationed there from spring 1918. Mine components arrived by train, then were stored and assembled in large warehouses. When ready they were shipped by rail to Invergordon, for loading onto ships to be sent to the North Sea. Over 38,000 mines were produced and dispatched in the months until the Armistice.

In 2018 John Bower & his wife Mindy travelled over from America to visit the area, as his Grandfather Wayne O Abbott had been one of the young US sailors who were based at Dalmore.  During his time at Base 17, Wayne took many photographs of the mine sheds and his workmates which he sent back to his mother in the States, and documented his experience in a diary.  A large collection of Wayne's annotated photographs were donated to Invergordon Museum along with his kit bag, base ID card, Liberty card and concert programmes. 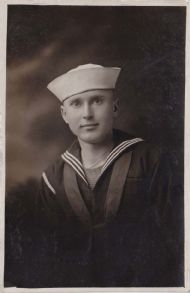 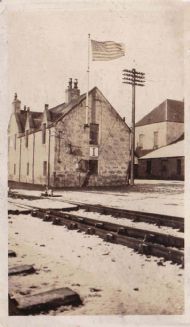 Dalmore during WWI
The American flag flying at US Base 17

The group created an exhibition on wartime Dalmore which is now on display at Invergordon Museum.  Various resource material is also kept at the museum, and binders of information are also being deposited in Alness and Invergordon Libraries and Alness Heritage Centre.

The project was funded by the Port of Cromarty Firth and Orion Group, with additional support from ARCH, Invergordon Museum and Alness Heritage Centre.